A guide to color in the Classical world

Many ancient statues in the Carlos galleries are not complete. Some are missing arms, some are missing heads. Some are now only heads! There is one thing missing from all of them. Can you guess what it might be?

Yes, ancient sculptures were often quite colorful. Their white marble surfaces were painted, adding details like eyes and eyelashes, natural-looking color to elaborately carved hairstyles, and vibrant color to clothing. Sometimes the statues were embellished with silver or gold. 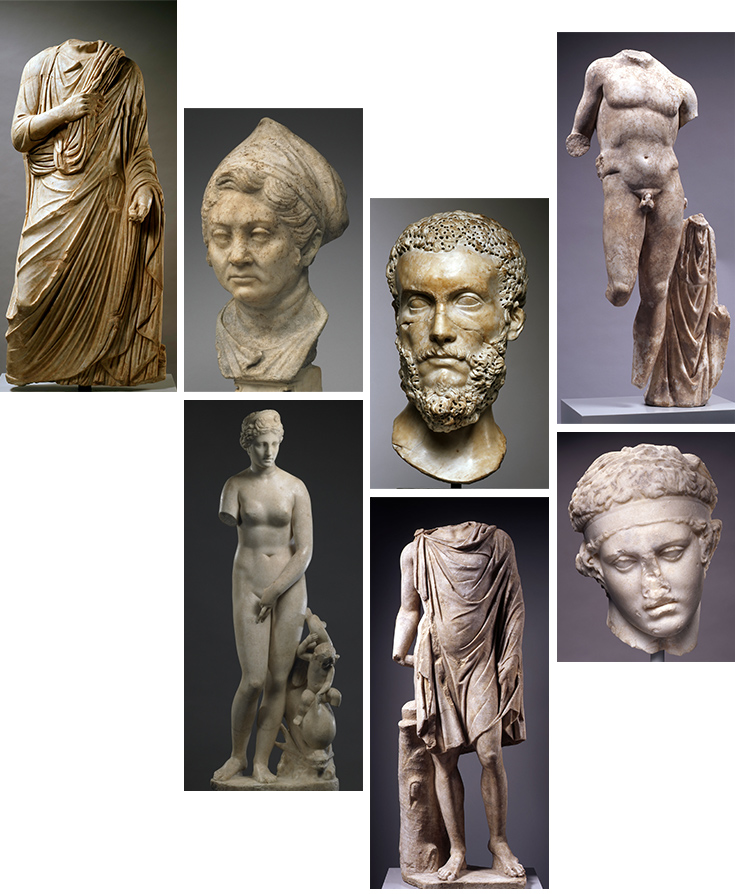 This is an ancient Greek statue of Terpsichore, one of the nine muses — goddesses of the arts and sciences who inspired creativity in poets, singers, playwrights, astronomers, and others. Terpsichore is the muse of dance. Her name means “delighting in the dance." 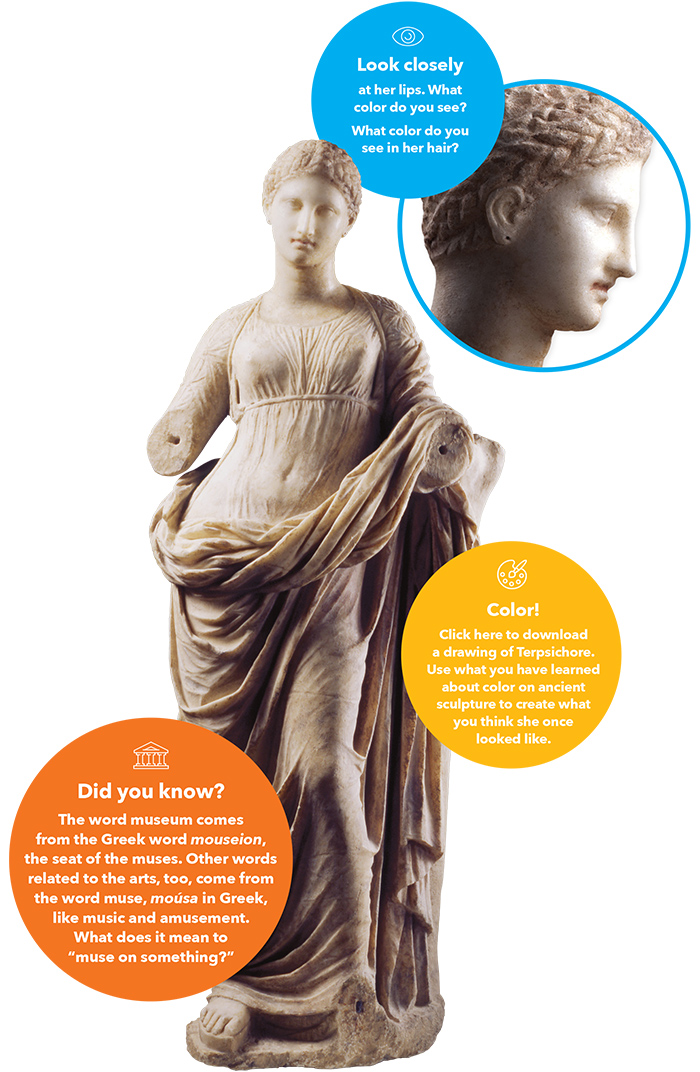 Below are some of the minerals used by ancient artists to make colorful paints. 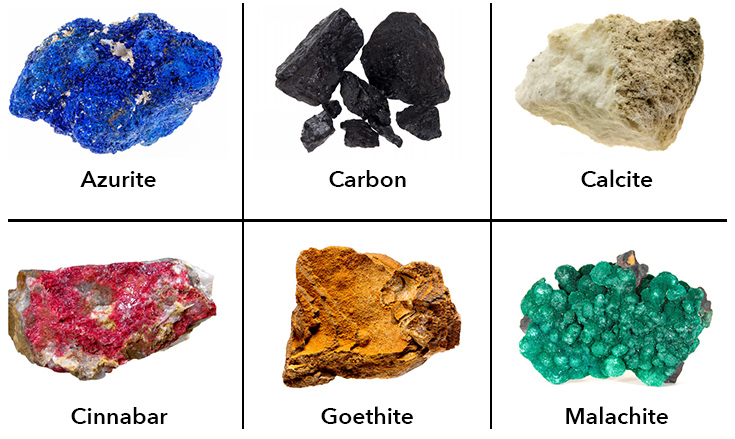 Most colors that enlivened statues like Terpsichore were made from colorful minerals that were finely ground and mixed with egg yolk or beeswax to make paint.

Red, like the color on Terpsichore’s lips, was most likely made from a mineral called cinnabar. The brown in her hair may have come from iron oxides like umber or sienna.

After a sculpture was painted, it was polished with wax, but even with this added layer of protection the pigments used on ancient sculptures were not permanent, and they frequently had to be repainted. The bits of paint that remain are often in protected places, like between Terpsichore’s lips, or deep within the folds of sculpted fabric.

What do you see? Why do you think the holes are there?

Her ears are pierced! She would have worn earrings, probably made of gold. 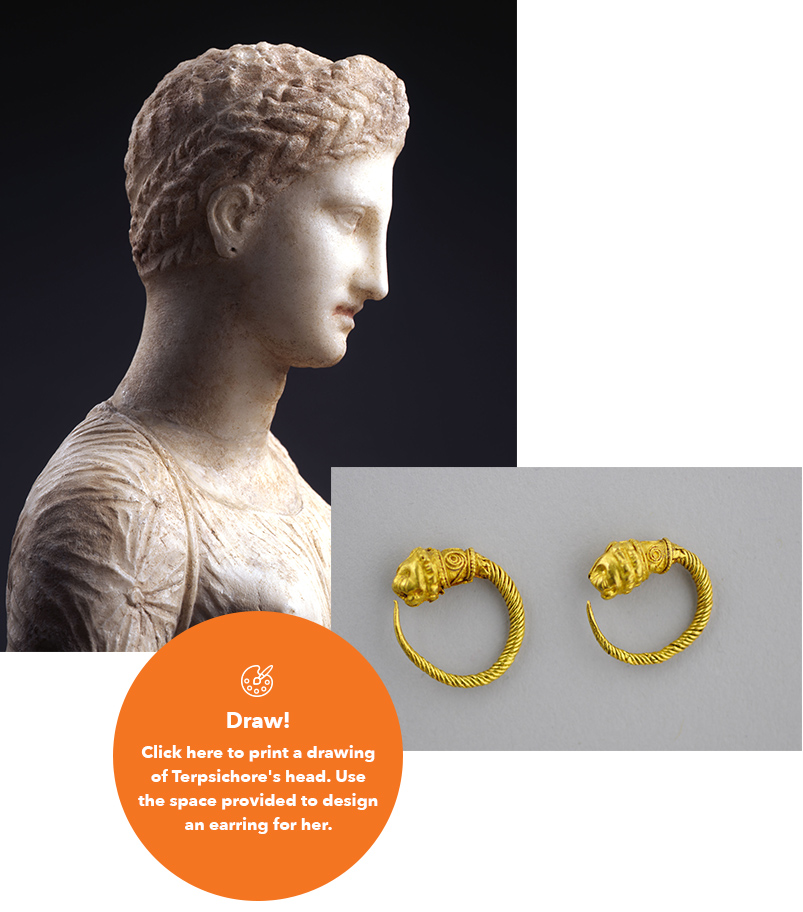 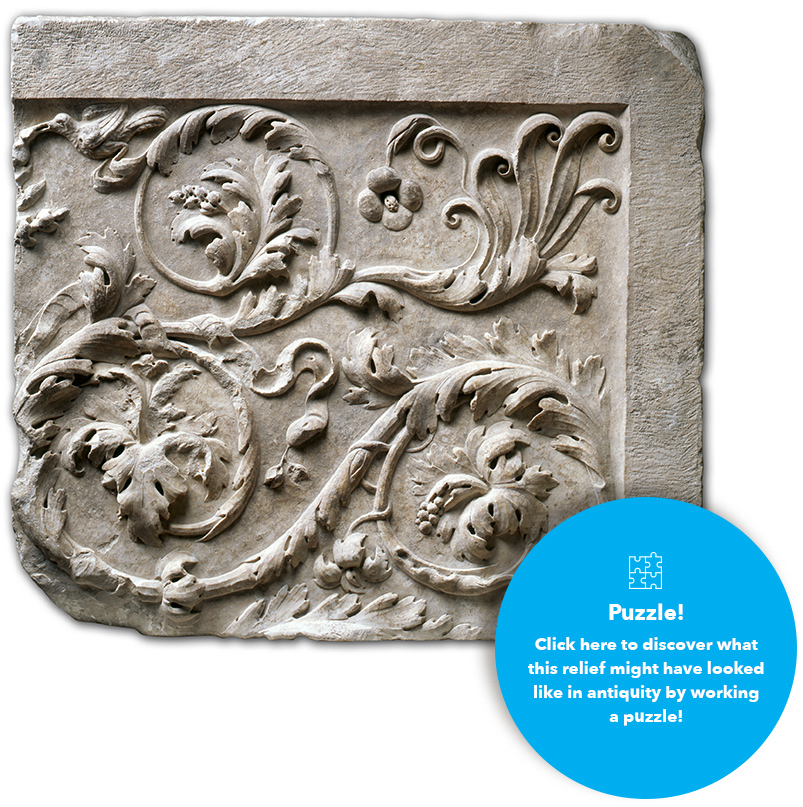 Look closely at this Roman relief from the collection to find the large, scrolling leaves of the acanthus plant, a ribbon that wraps twice around the stem of the plant, and a mother bird feeding her baby.

Like Terpsichore, this relief would have been painted. And because it may have been created in the same workshop that created one of ancient Rome’s most famous monuments, we have a good idea what it might have looked like.

The Ara Pacis Augustae (Altar of Augustan Peace) was erected in the 1st century BC to honor the Roman emperor Augustus. The band of decoration around the lower half of the monument, which looks so much like the Carlos relief, was meant to communicate the prosperity of the Roman Republic under Augustus’ rule. 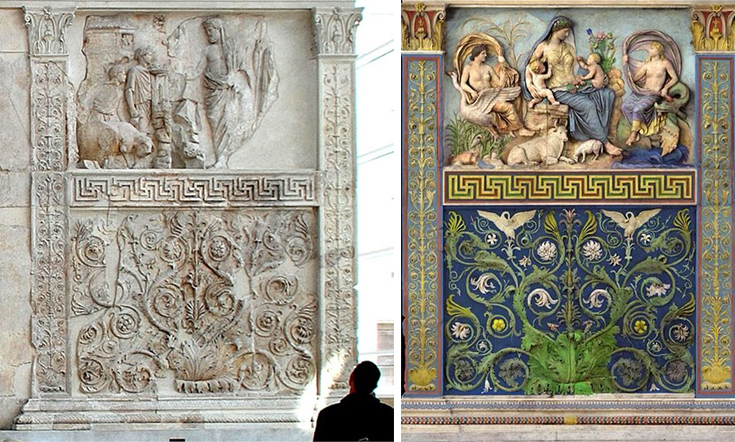 Scholars have carefully studied the pigments that remain on the altar and have found a way to recreate its original appearance using projected light.

Objects made of other materials have changed color over time as well. 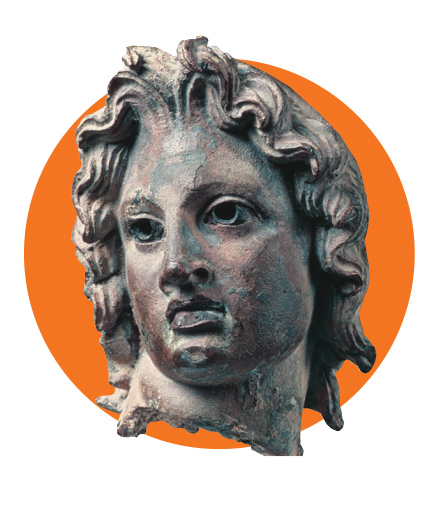 This striking portrait head of Alexander the Great, king of the ancient Greek kingdom of Macedon is actually quite tiny, only 2 1/4" tall. 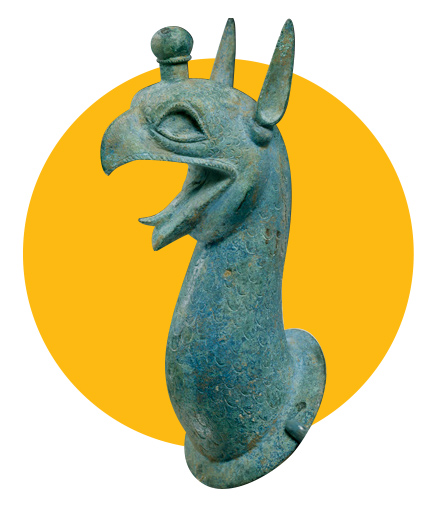 A pair of griffins, mythical monsters with the head and wings of an eagle, the ears of a horse, the body of a lion, and the tail of a snake, were handles for a cauldron. 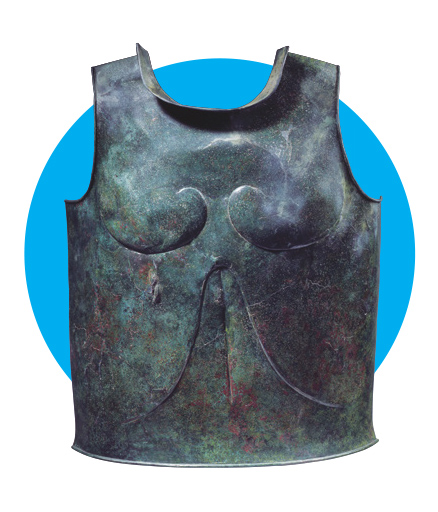 A cuirass is a piece of ancient Greek armor. It has two parts, a breastplate and a backplate, which would have been fastened together with leather ties.

All of these objects are made from bronze, a metal produced by mixing copper with a smaller amount of tin. When they were first made, they would have been a warm golden color like the image of bronze below but, over time, they have all turned green. What do you think caused that change?

Exposure to oxygen in the air causes a type of surface corrosion known as oxidation. It happens slowly, so some pieces have a mottled surface showing both green and gold.

Imagine a soldier dressed from head to toe in the shiny, golden bronze armor. Picture the tiny head of Alexander, with hair and skin the warm, golden color of the bronze, bright copper lips, and realistic looking eyes of inlaid white and colored stone. He may have even had silver eyelashes!

Drawings by Emory student Esther Park. SmARTy Packs are made possible by the generous financial support of the David R. and Margaret C. Clare Foundation.

Objects in this SmARTy Pack