The Diné (Navajo) Wedding Basket by an unknown artist at left is an example of coiling, in which a sturdy rod or bundle of split rods forms the shape of the basket and more flexible strips are wrapped or looped around to secure the coil. The basket bowl at center (Yurok, Karuk, or Hupa) is made using the twining technique, in which a pair of horizontal strips alternately twist in front of and behind a framework of vertical rods. Rowena Bradley’s basket on the right is an example of the plaiting technique frequently used in Ani’yunwi’ya (Cherokee) tradition. Similar to weaving, plaited baskets feature two perpendicular sets of elements crossing over and under each other, sometimes on the diagonal.

Before the Carlos Museum closed in March due to COVID-19-related safety concerns, museum staff prepared and installed a number of baskets in the Native North Americas gallery as part of an annual rotation to limit light exposure for especially vulnerable objects. 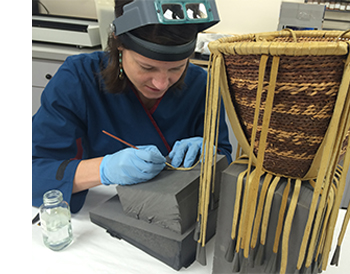 Mellon Advanced Fellow in Conservation Kaitlyn Wright completed the conservation work on many of them, including a Diné (Navajo) wedding basket. Reflecting on my own basket treatments for the 2016 exhibition Coiling Culture: Basketry Art in Native North America, I recall that one of my favorite aspects of the exhibition was that it featured examples from a number of local collectors.

Serious collectors or not, many of us probably have basketry with meaningful histories in our homes. Whether Native North American, Colonial American, or personal objects, baskets from all cultures and time periods are typically comprised of plant materials that are coiled, twined or woven.

Everything from parts of stems and trunks to roots, leaves, and fibers from fruits and seeds can be worked into the structural or decorative elements of baskets. Examples of familiar basketry sources are willow, sumac, sweetgrass, juncus, and river cane, but materials range widely to include palms and even coconut fibers. Both synthetic and natural dyes can be used to color baskets. Examples of basketry are found throughout the Carlos Museum collections and can be seen in the galleries.

Baskets are intricate combinations of organic plant materials, making them vulnerable to a number of risks:

Tips for Caring for Baskets