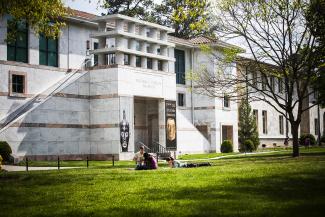 About the Carlos Museum

Set in the heart of Emory’s Atlanta campus, the Michael C. Carlos Museum is a dynamic, interdisciplinary center for the study of art and culture, with collections from Africa; ancient Egypt, Nubia, and the Near East; ancient Greece and Rome; the Indigenous Americas; and South Asia; as well as American and European Works on Paper.

Through our permanent collections, engaging special exhibitions, and innovative programs for audiences of all ages, the Carlos Museum connects the past with the present and the campus with the community. The museum is committed to emphasizing diverse voices, perspectives, and disciplines.

Curators and faculty develop original exhibitions, engage in interdisciplinary research and teaching, and host touring exhibitions that complement our collections and support the teaching mission of the university. The museum’s conservators collaborate with staff, faculty, and students to conduct research and manage preventive care on the museum's varied collections. Museum educators reach across the museum, campus, and city to develop opportunities to engage the intellect and the imagination of university students and faculty, preK-12 students and teachers, and the larger Atlanta community.

The Michael C. Carlos Museum of Emory University collects, preserves, exhibits, and interprets art and artifacts from antiquity to the present in order to provide unique opportunities for education and enrichment in the community and to promote interdisciplinary teaching and research at Emory University.

Emory University’s collections date back to 1876 when a museum was formed on the original campus in Oxford, Georgia. At this stage in its development, the museum’s collection resembled the Renaissance wunderkammer, or “wonder room;” here, an assortment of objects such as artifacts collected by Methodist missionaries and Emory faculty working in Asia were displayed for the enjoyment of the public.

After the collection moved to Emory’s main campus in 1919, attempts were made to transition the eclectic assortment from Oxford into a research-quality collection. Through the mid-20th century, the collection grew in the areas of natural science and archaeology.

The museum began a period of significant transition in the 1980s, as Emory faculty worked to refine the collection and find a permanent home for the museum with the assistance of university administration. In 1985, with the support of local philanthropist Michael C. Carlos, the museum moved into the old law school building, whose renovation was designed by Michael Graves.

The collection of the Emory University Museum of Art and Archaeology as it was then known had been reorganized and refocused to align with the research and teaching objectives of university faculty in areas such as Latin American, African, and classical art and Middle Eastern Studies.

In 2019, the museum celebrated 100 years of inspiring generations of Emory faculty and students as well as visitors from Atlanta and beyond who have sought to enrich their lives through the study of and experiences with art.

We are part of the Emory University system. Click here to learn more about open positions.