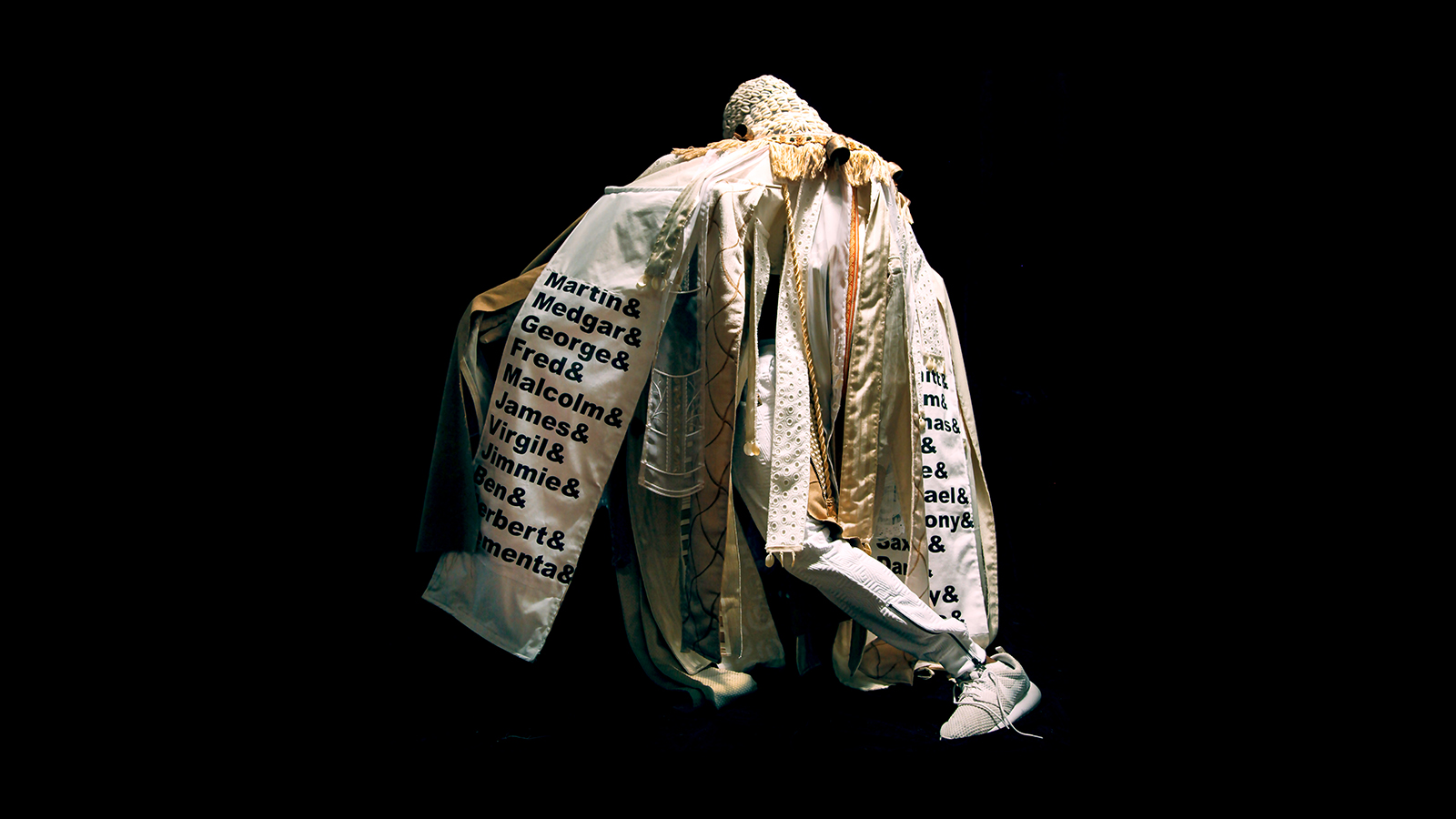 Is it possible to go home again? Dr. Fahamu Pecou’s DO or DIE: Affect, Ritual, Resistance, on view at the Carlos through April 28, suggests not only the possibility of homecoming but also the radical power of community.

DO or DIE represents a personal homecoming for Pecou, an Atlanta-based artist who was a graduate student in Emory University’s Institute of Liberal Arts when he created the artwork for the exhibition.

Based on doctoral research, DO or DIE explores the intersections between African-based spiritual traditions and the political and societal violence against Black male bodies in the US. Pecou positions these bodies within Ifá, a diasporic religion of the Yoruba of southwest Nigeria.

Here, where spirits are infinite, a healing alternative exists for slain Black men and their communities through the use of Egungun, a Yoruba mask.

Egungun means “the powers concealed,” according to Curator of African Art Amanda Hellman. At funerals and during annual festivals, Yoruba Egungun societies sponsor masquerades. A member of the society dons the mask and begins to dance.

“As the performer begins to move, he is transformed, incarnating the spirit through dance,” she notes. “The ancestor, given form again on earth through the masquerade, can now act on behalf of the community by upholding justice and serving as a reminder of what it means to be Yoruba.”

"Within the Yoruba diaspora created by the collapse of the Oyo empire," Hellman continues, "Egungun was one of the practices upon which people relied to maintain their traditions and cultural identity.

The exhibition’s centerpiece is Pecou’s “new world” Egungun comprised of a white hoodie, sweat pants, athletic shoes, a cowrie shell mask, and panels of fabric intended to catch the wind as the wearer dances.

Three of those panels bear the names of Black American men murdered as a result of racism and oppression. More than reminders, they are invocations of specific ancestors—Martin, Malcom, Medgar, Michael, and Trayvon among them—who are called home to bring healing and protection.

Through the names of new world ancestors on his Egungun, Pecou reframes Black life and death. “African spirituality, concepts, and philosophies allow us space and freedom to think about and see ourselves as whole and human,” he explains. “These ideals contradict the broken, tortured, and oppressed images of blackness that we find in the context of Western visual culture.”

There is more in play, however, than a useful alternative to the spectacle of black death. Egunguns are manifestations of both spiritual and political power, according to Hellman: “An Egungun danced is an Egungun impelling everyone who is witness to be moved into action . . . . Egungun [obliges one] to remember and to act.”

DO or DIE: Affect, Ritual, Resistance, was organized by the Halsey Institute of Contemporary Art at the College of Charleston, in collaboration with the Michael C. Carlos Museum of Emory University.

A version of this story was originally published in the museum's spring 2019 newsletter.