A guide to snakes in the Carlos Museum's Egyptian collection

Imagine you are walking along, and a snake suddenly slithers across your path. How do you think you would feel? The ancient Egyptians both feared and revered the snakes they encountered in their daily lives. Snakes were dangerous; a bite could be deadly.

But they were also helpful, ridding the storehouses of mice and rats that fed on precious grain. Use this guide to learn more about the snakes found in Egypt and the ways the ancient Egyptians thought about them.

In the Egyptian galleries of the Carlos Museum, you will find this rectangular coffin decorated with green hieroglyphs, the coffin of Nebetit. Look for a snake in the center of the top row of hieroglyphs. This is an image of the horned-viper. The scaly body of this desert-dwelling snake is the same color as the stony sand in which it lives, providing excellent camouflage. Sometimes it buries itself in the sand, leaving only its head exposed. 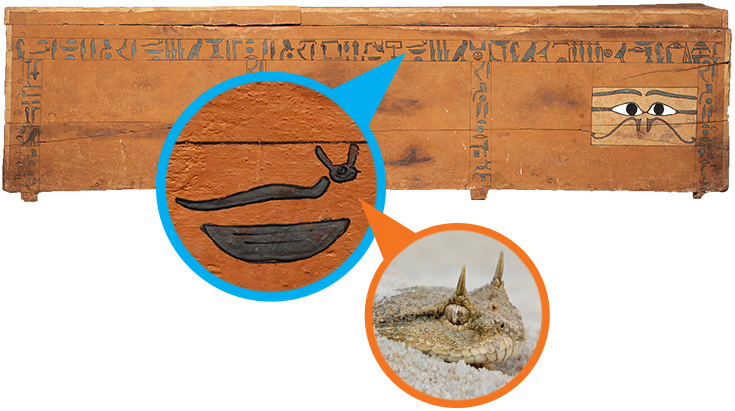 Horned vipers move swiftly across the desert by sidewinding—throwing their bodies forward in repeated s-curve movements. The movement of the snake across the sand makes a sound like a repeating letter f. Try to mimic the sound yourself. The Egyptians, close observers of the natural world, wrote the hieroglyph for the f sound in the form of the horned-viper, perhaps because they heard this same sound. Watch this video of a horned viper side-winding its way across the desert.

Try drawing the hieroglyph of the horned-viper. As you draw the image, notice that the head and the body are not connected. The ancient Egyptians, acknowledging the potential danger of this powerful image, severed the head from the body so it cannot harm Nebetit.

Also in the galleries is this carved image of the head of a king wearing a cobra on his brow. This crown is called a uraeus, from the ancient Egyptian word yaret, which means “the one that rears up.” Actual cobras can be up to eight feet long and when they sit upright and flare their neck ribs into a hood, they present a dramatic and threatening image appropriate for a king. A cobra’s bite can kill, but the snake’s fangs are not its only weapon. Cobras can also shoot streams of venom from glands behind their fangs up to six and a half feet with astonishing accuracy. For ancient Egyptians, the image of the rearing cobra both protected the king and projected his power. Watch this video of a cobra spitting venom at a lion. 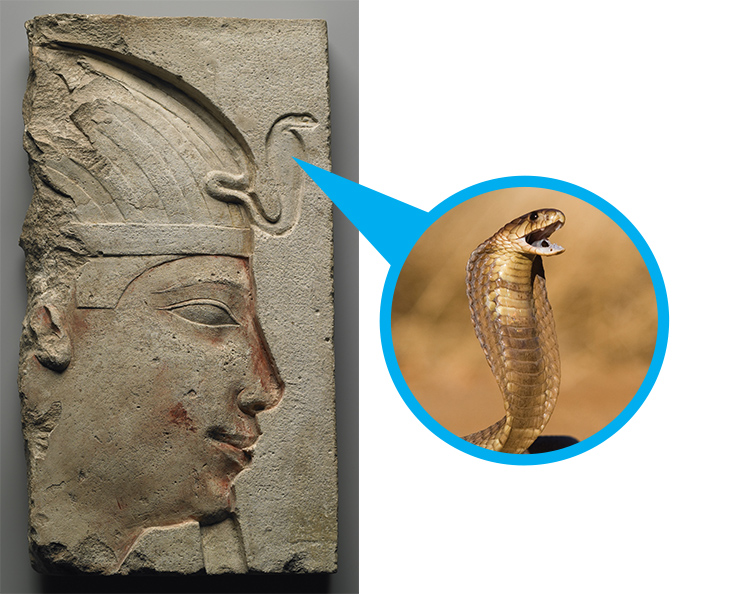 Like all royal crowns, the uraeus was a gift to the pharaoh from the sun god Ra, and the rearing cobra often appears with a golden sun-disk atop its head. Can you find the uraeus with a sun-disk on its head on this mummy? How many do you see? What part of the mummy’s body do they represent? The Egyptians would have loved this playful representation of the mummy’s toes, but they would have seen a serious meaning as well, a reference to the rising sun, whose reappearance each dawn symbolized the promise of rebirth. 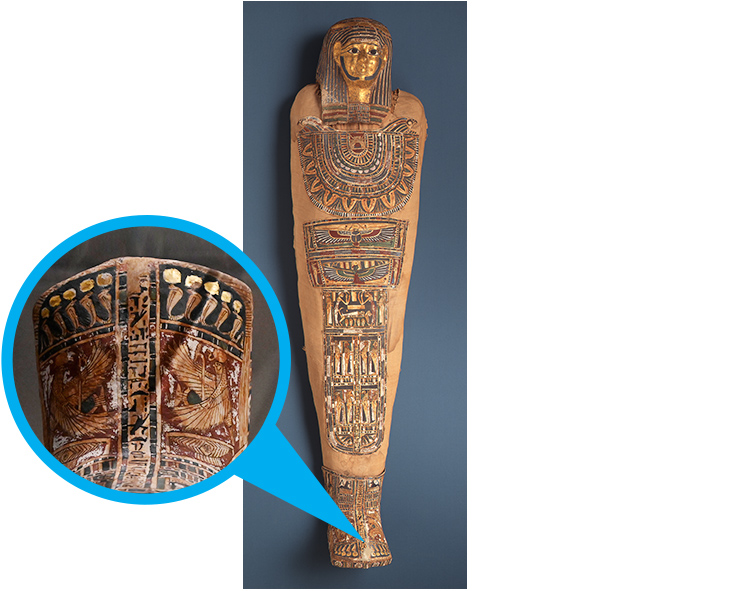 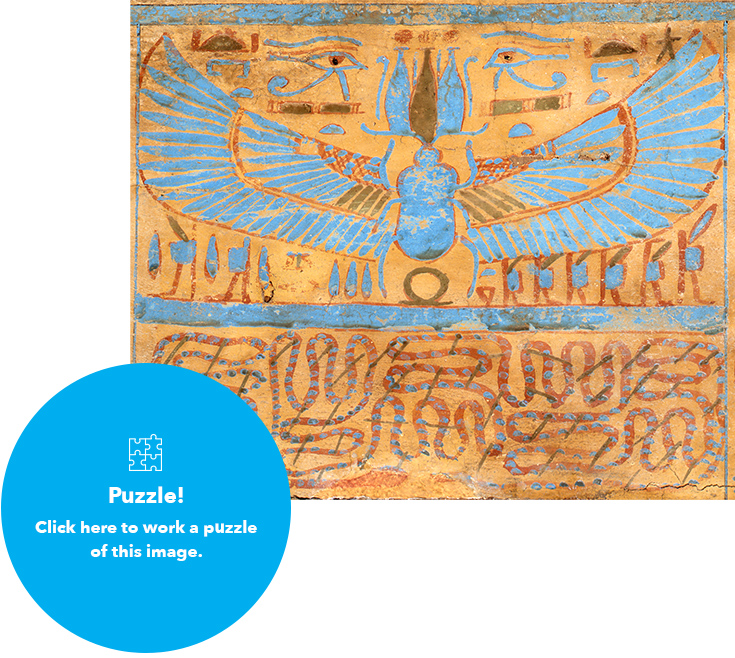 Egyptian art is full of the snakes that inhabited the natural world, but the Egyptians also imagined fantastical snakes in the Underworld. This twisting, turning image of a giant serpent, which looks almost like a maze, is on the of a coffin in the Egyptian galleries. This is Apophis, enemy of the sun god Ra. Apophis exists outside of the created world and to the Egyptians represented chaos. If Apophis can defeat the sun god as he journeys through the Underworld each night and prevent the sun from rising, all of creation will collapse into nothingness. But the image of the rising sun in the form of the scarab just above the snake attests to Ra’s victory. Look closely at the image of the snake. Can you tell what weapons were used to defeat him? Ra and his defenders attacked Apophis with sharp knives. 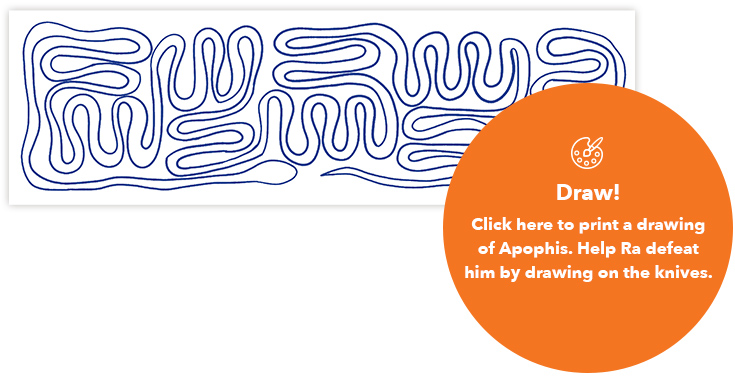 One coffin in the collection, the coffin of Tanakhtnettahat or Tahat for short, is decorated with 198 different images of snakes. This detail from the side of the coffin depicts the sun god Ra in his solar boat. Look for an upright image of a snake right in front of him. This is Mehen, who protects the sun god as he travels nightly through the Underworld. Since the ancient Egyptians understood that snakes could be dangerous and helpful at the same time, it makes sense that they used them to represent both Apophis, his enemy, and Mehen, his ally. 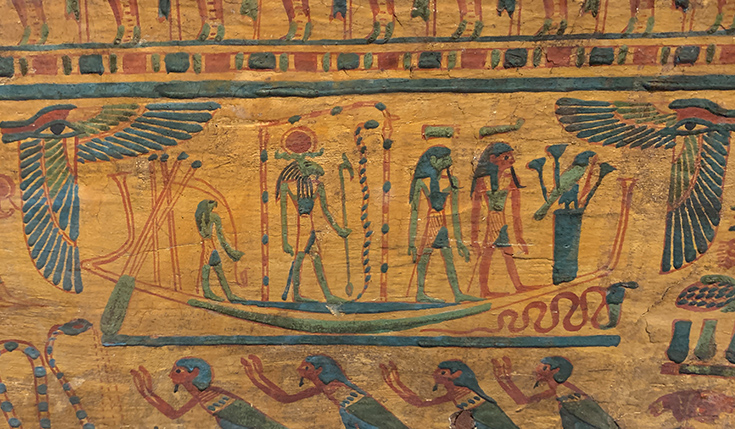 On another coffin, that of Pashedkhonsu, a long, elaborately twisting image of Mehen completely encircles Ra. 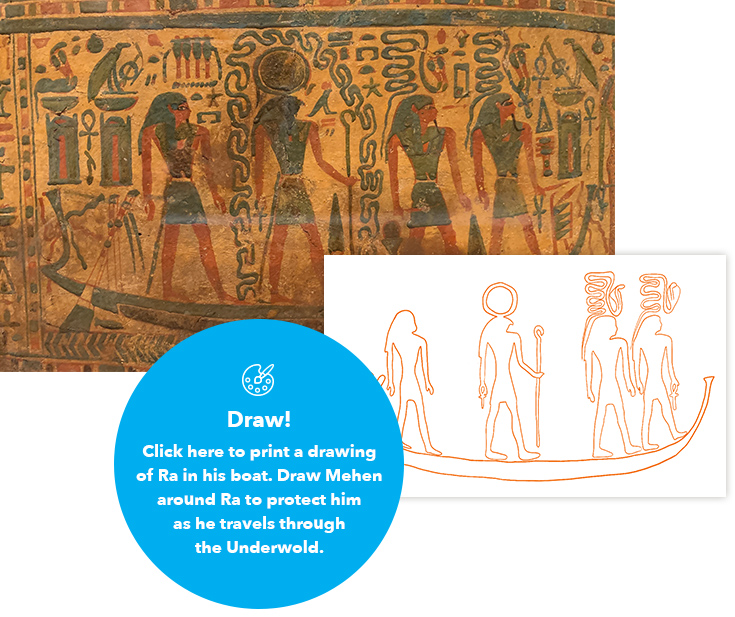 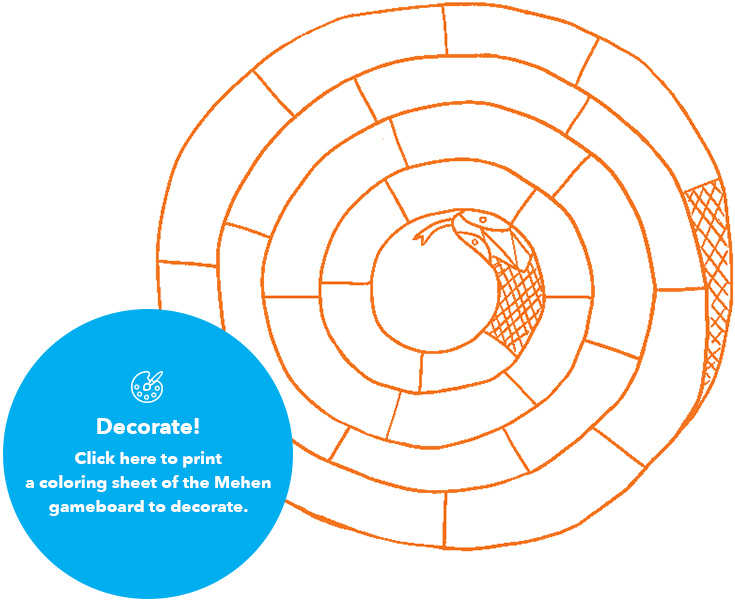 The name Mehen means “the coiled one.” During the Old Kingdom, Egyptians played a game called Mehen on a gameboard in the form of a coiled snake. The goal was to be the first to move around the image of the serpent, starting at the tail and moving to the head at the center of the board.

Snakes were a constant danger in ancient Egypt, especially to children. This small, clay object called a cippus was used both to protect against and cure snakebites and scorpion stings. On the cippus, Horus-the-child stands atop two crocodiles and grasps snakes and scorpions in his hands.

According to one myth, young Horus was stung by a scorpion and cured by the god Thoth. The images and spells carved on the cippus impart the same divine healing power to others. The Egyptians believed strongly in the power of images and words. If a child was bitten or stung, family members would recite the spells incised on the cippus and give the child water that had been poured over its surface to heal the wound. 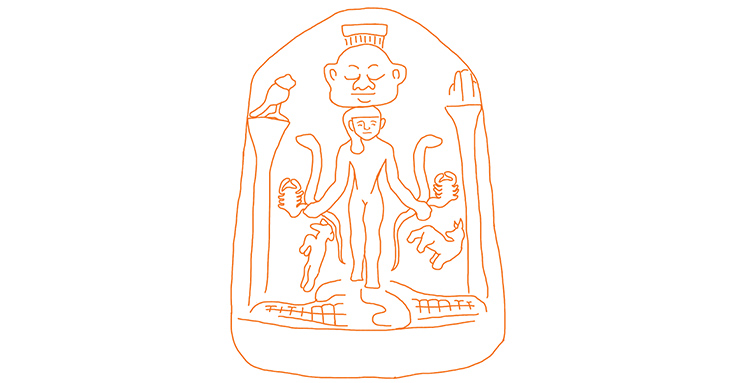 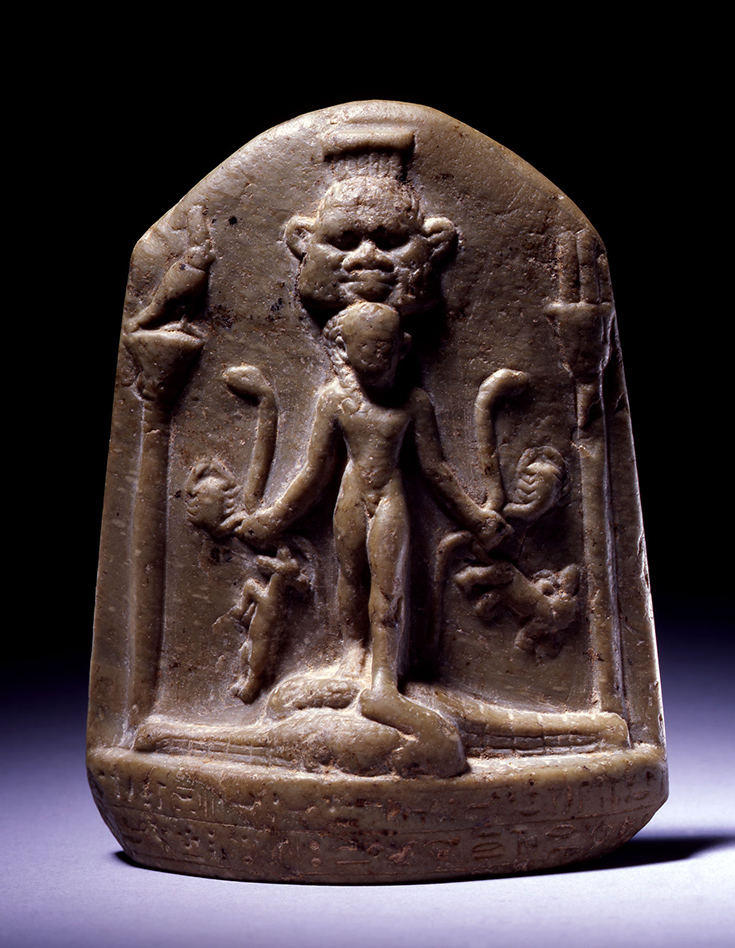 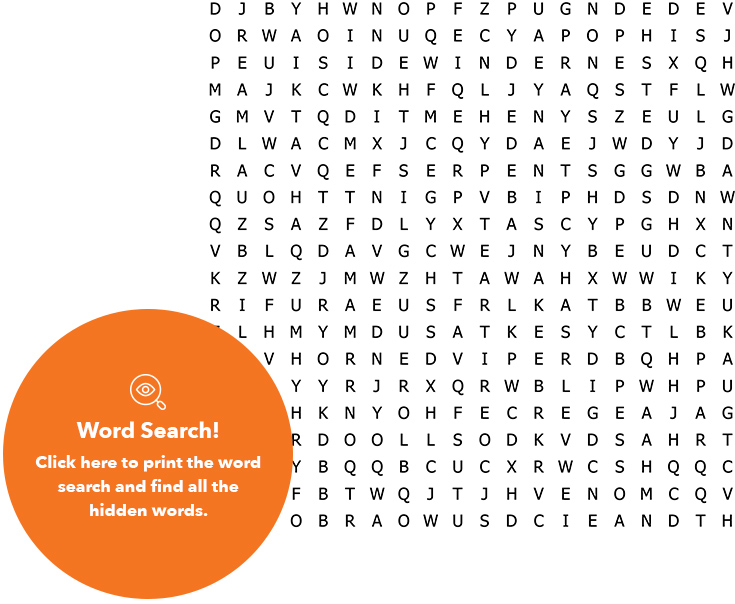 All of these words are hidden in this word search puzzle. Can you find them?

Snakes are found all over the world and in every gallery of the Carlos Museum.

In the South Asian galleries, Vishnu sleeps on the body of the serpent Shesha in between the cycles of time. Apollo and Artemis battle Python in the Greek and Roman galleries. Snakes encircle the water spirit Mami Wata in the African galleries and snakes of all kinds, like this rattlesnake, can be found in the Art of the Americas galleries. 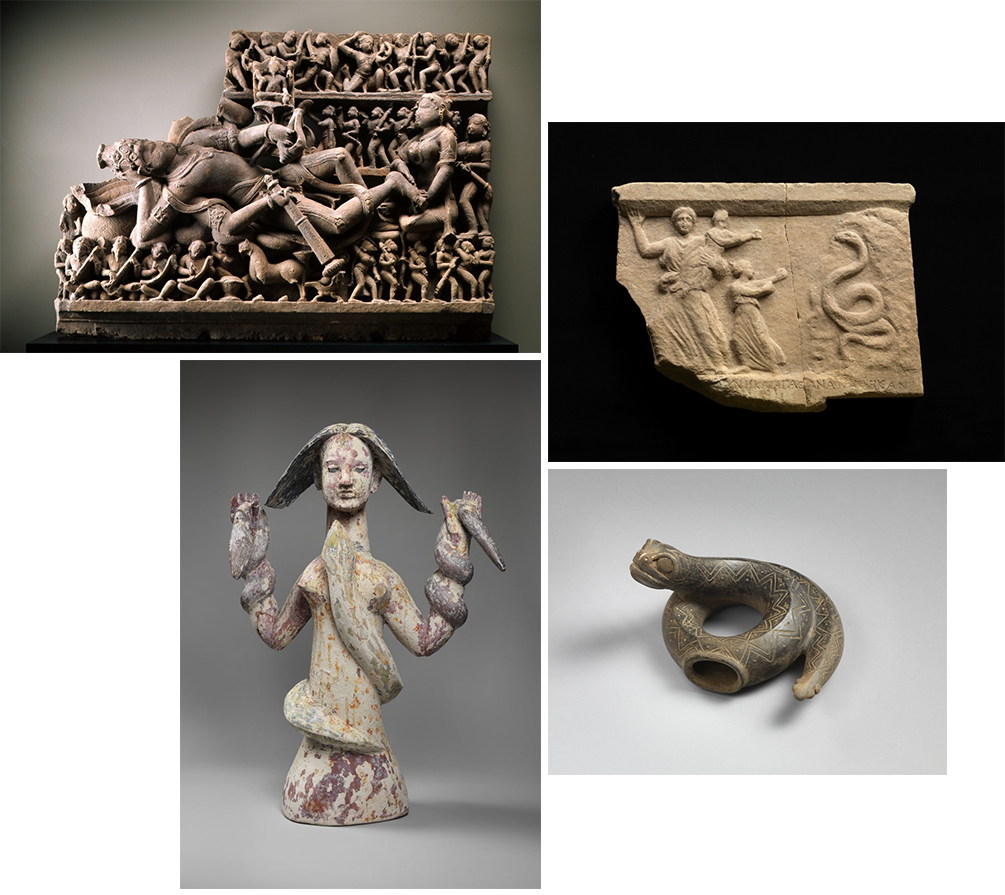