Check Out Those Kicks!

A look at traditional and contemporary footwear in Native North America

Take a moment to look at the shoes you are wearing or the ones in your closet.

What colors are they? What types of patterns do they have? Who do you think designed them?

Today you will be looking at moccasins, a type of footwear made and worn by Native Americans. Like your shoes, the people who make moccasins think carefully about the function and also about the colors and designs that decorate them.

These moccasins were made by the Arapaho people. Notice the pattern on them. What do you think it represents?

All of the patterns found in Native American beadwork have meaning, either to the beadworker, the tribe, or both. The colors used in patterns also have meaning.

Read the names of Arapaho color words below out loud. 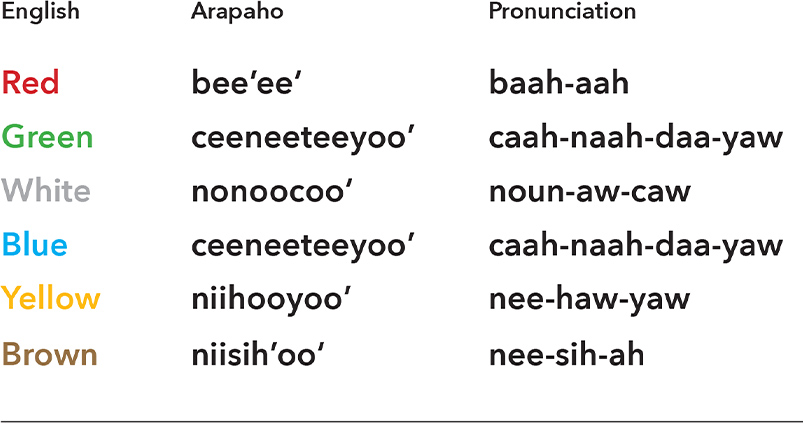 Why do you think the creator of these Arapaho moccasins used these colors? Notice that the words for green and blue are the same. This is true in many cultures. Why do you think this is? What colors would you use? 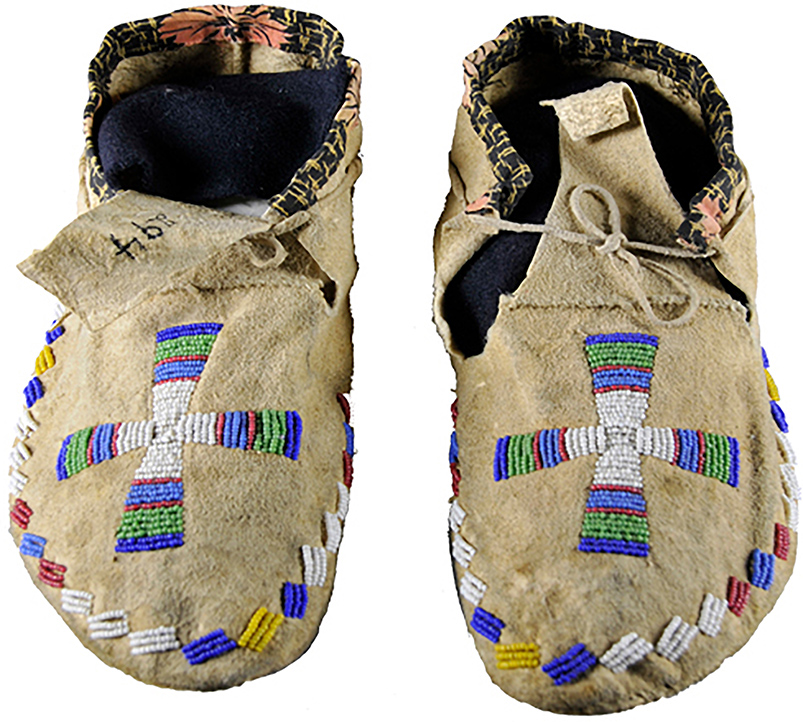 Now, look closely at the beads on the moccasins. These tiny beads are called “seed beads.” 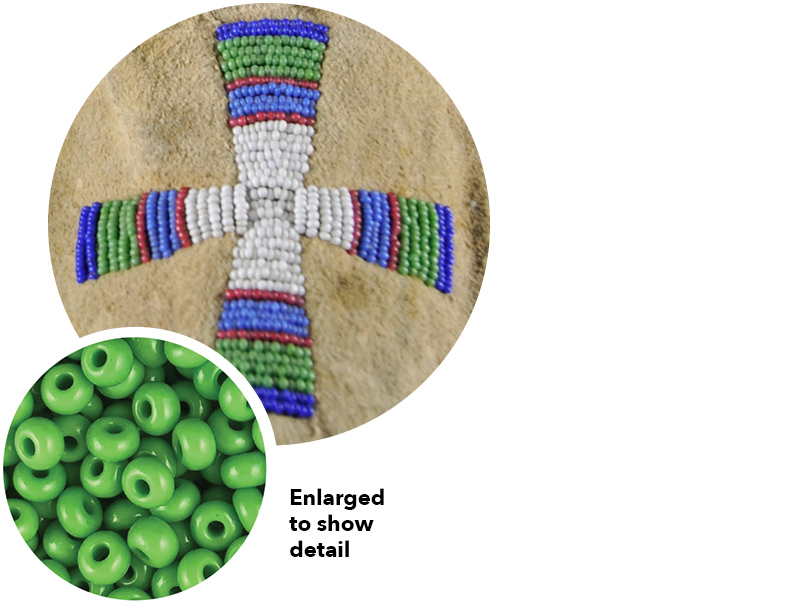 Seed beads were introduced by early European traders. Before trade began, Native American peoples adorned objects with porcupine quills. Quills were plucked from porcupines, cleaned, and dyed with natural materials before being sewn onto or woven into moccasins, clothing, drumsticks, and other items. Quillwork is very labor-intensive, so Native Americans quickly embraced the colorful, ready-made beads, alongside their traditional quillwork (below). 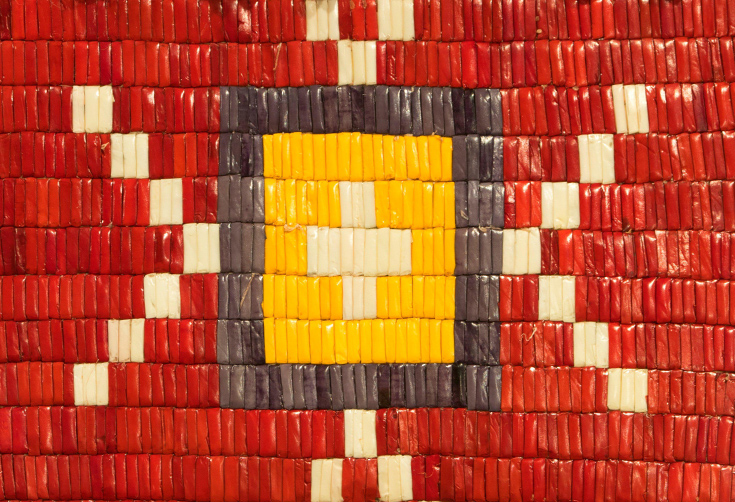 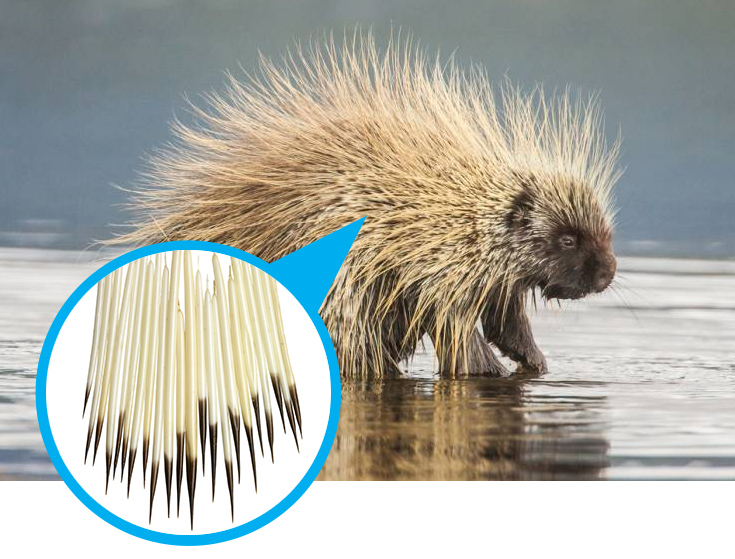 The word moccasin comes from the Virginia Algonquian word mockasin which means, “shoe.” There are 573 federally recognized Indian Nations (variously called tribes, nations, bands, pueblos, communities, and Native villages) in the United States, and each has their own word for “shoe.” The Tuscarora Nation, surrounded by New York State, call shoes mat-mats. The Navajo Nation, bordered by Arizona Utah, New Mexico, Colorado, and the Hopi Nation, call them kélchí. Today “moccasin” is the word most commonly used by Native American and non-Native peoples to describe traditional Indigenous North American footwear. 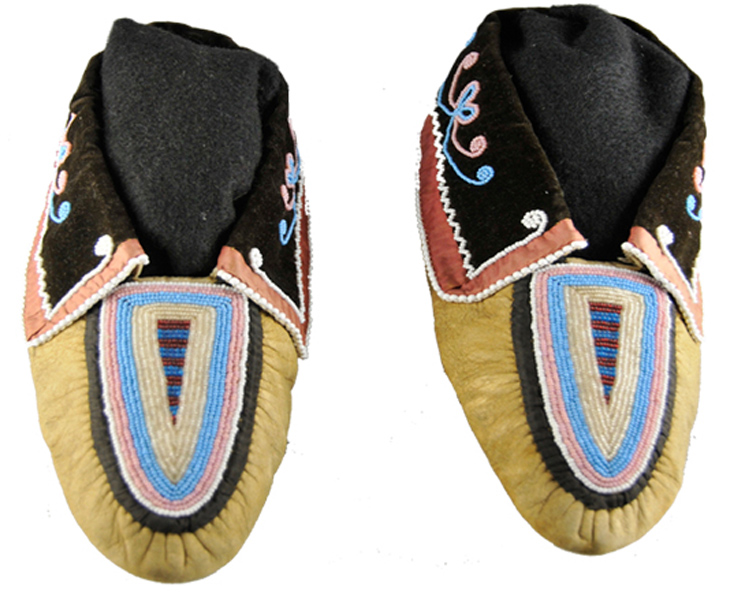 Notice the design on this pair of moccasins made by the Lenape people. What do you think the design represents? Why do you think so? Though it is shaped like a heart, it may represent something else as well. Many Native American tribes, particularly those in the Northeastern part of the United States, use the strawberry plant, sometimes called the heart-berry, as a design motif. One of the first fruits of spring, the strawberry holds special significance for many Native peoples. For the Haudenosaunee (Iroquois), the strawberry was one of the medicines Sky Woman brought to earth with her. The lines coming off the central heart shape may represent the runners that strawberry plants send out, with tiny new plants curled at the end. 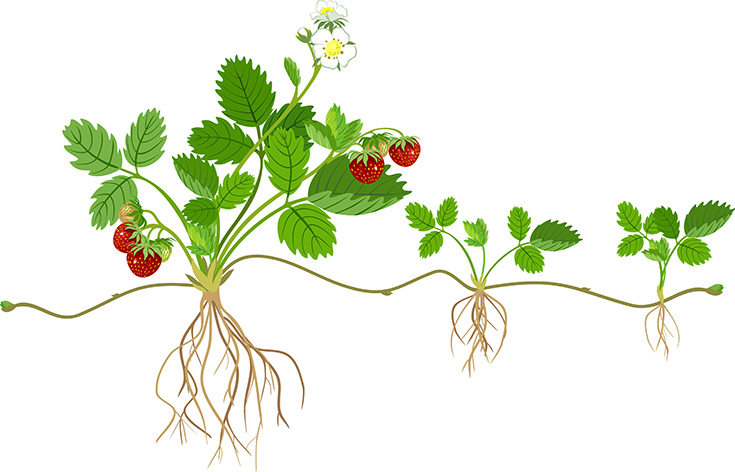 The Lenape people tell a story of how moccasins came to be. As told by Robert Red Hawk Ruth and translated by Zack Wiener, there was once a young man who was fond of a beautiful young woman who lived in the Lenapehoking, the traditional lands of the Lenape people in the Northeastern Woodlands. The young woman was annoyed that her bare feet became very dirty when she went out to the wikiyup (dome-shaped lodge) to grind corn. The young man took notice of his love’s problem and searched for a way to help.

The young man decided to kill a deer each day and tan its hide so the young woman could stand on it while she worked. However, this was very frustrating for the elders. Killing a deer every day just for its hide wasted valuable meat. The elders came up with a solution for the young man—to cut the softened tanned hide into the shape of the young woman’s foot. 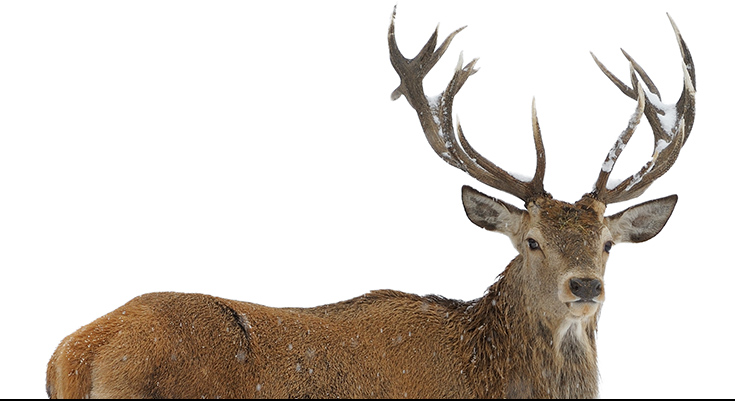 “Mila na skixkwa” the elders said, which meant, “give it to her, the young woman.” And so, the young man did, and his love was grateful for her gift. The young woman married the young man. And so, it existed the first moccasin, “ok hate ne netami lenhaksen.”

Every tribe and region of North America has its own way of crafting moccasins, determined in part by the climate where they live. Native peoples living in colder regions add more insulating materials to their footwear, whereas those in warmer regions do not. Notice the soft velvet used in the Lenape moccasins. 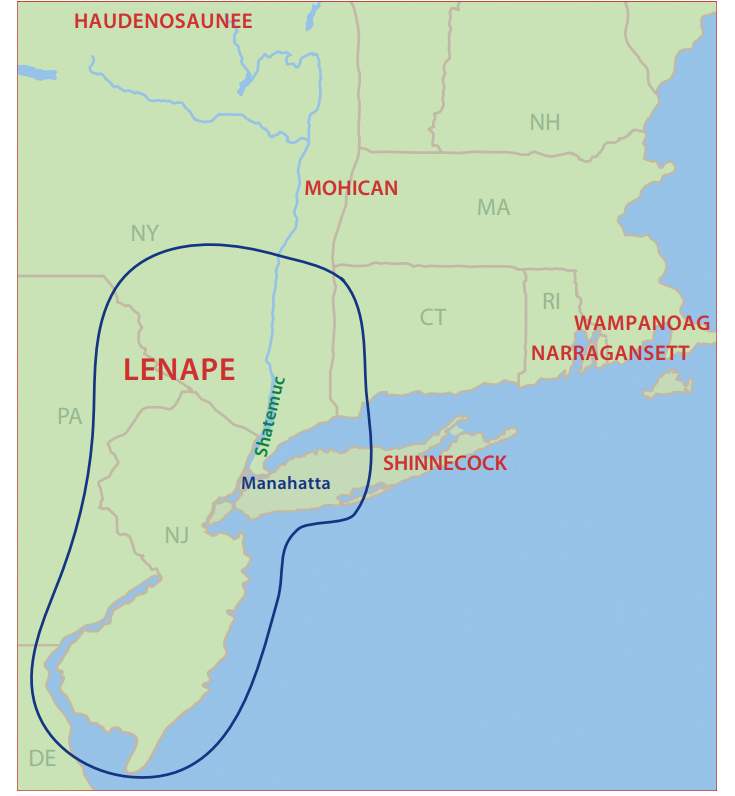 Swinomish people consider themselves, “people of the salmon.” Chum, Sockeye, Pink, and Coho salmon can all be found in the Puget Sound. Every year starting in August, the “salmon run” begins. Salmon travel inland hundreds of miles, up river, where they lay and fertilize eggs in gravel beds, a process known as spawning, to create the next generation of salmon.

The journey from the Pacific Ocean to the inland gravel beds is very difficult. Salmon have to swim upstream—against the current, evade bears and other predators, jump up waterfalls, and scrape along many rocks in order to return to the places where they were born.

These moccasins were made by the Swinomish people. What material is used to add warmth to them?  What do the moccasins have beaded on them? What do the colors of the beads remind you of? 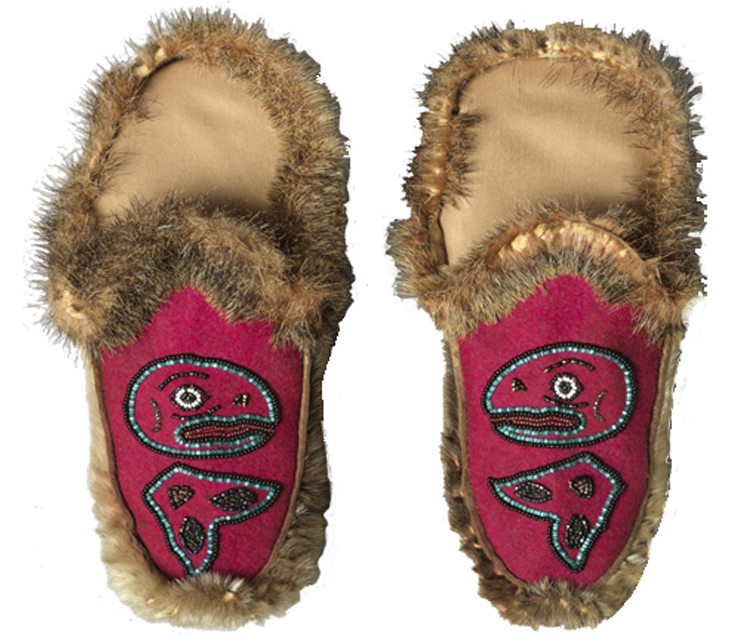 Watch this video of salmon jumping up the waterfalls! How did the artist who beaded the moccasins capture the action of the fish jumping?

In the same way that earlier Native peoples adopted new materials like glass beads, some contemporary Native bead workers have adopted new types of non-traditional footwear for their artistry.

Shoes like high heels, Converse, and Vans are being reimagined and beaded by Native Americans like Teri Greeves and Charlene Holy Bear, keeping Native traditions alive but making adapting them to their own time.

How can you reimagine your kicks? 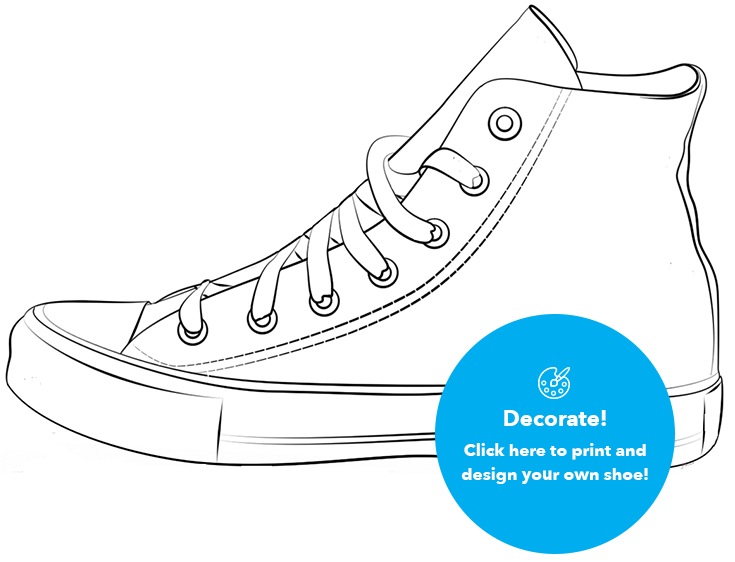 Play the Match the Mocs game to see traditional and contemporary beaded footwear from across North America. 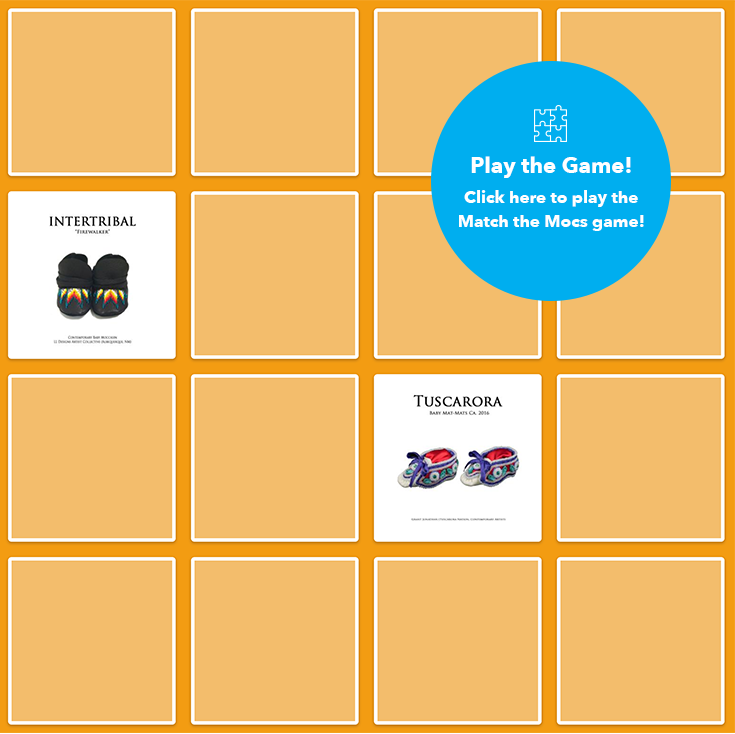 This SmARTy pack was written by Klamath Louise Henry 19C (Shasta Tribe of California and Tuscarora Nation of the Haudenosaunee Confederacy), Andrew W. Mellon Intern at the Carlos Museum, Summer 2019.