The Eye, the Mind, and the Heart: In Honor of Clark Poling

An exhibition honoring the legacy of Clark Poling, professor in Emory’s Department of Art History, former director of the Michael C. Carlos Museum, and faculty curator emeritus of Works on Paper. 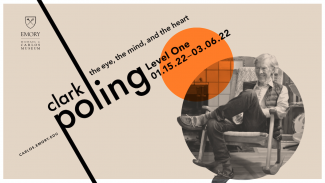 Image: Courtesy of the Poling family

The Eye, the Mind, and the Heart: In Honor of Clark Poling

During his thirty-three years at Emory, Clark Poling served as professor and chair of Art History, director of the Michael C. Carlos Museum (formerly the Emory University Museum of Art and Archaeology), and faculty curator emeritus of Works on Paper.

As director of the Michael C. Carlos Museum, Poling managed the major reorganization and reinstallation of the collections, worked alongside Michael Graves to design the 1985 renovation of the old Emory Law School building, and developed the museum’s first series of special exhibitions.

Poling was an internationally recognized art historian whose work in early twentieth-century French and German art and theory was highly regarded in the field. He published widely on the Bauhaus and artists Vassily Kandinsky and André Masson, among others. He curated innovative exhibitions at the Carlos and the High Museum in Atlanta, and forged partnerships with the Solomon R. Guggenheim Museum in New York, the Musée National d’Art Moderne, The Centre Pompidou, and Musée Picasso in Paris, Kunsthaus Zürich, and the Bauhaus-Archiv in Berlin.

This exhibition recalls Poling's work and the Art History Department's foundational course, Art/Culture/Context II (Art History 102) he taught.  The show reflects on his deeply held belief that studying works of art in person was essential in order to develop the eye, the mind, and the heart. These works were drawn from the museum's collection of Works on Paper, and many were acquired during Poling's tenure.

The Eye, the Mind, and the Heart is on view in the John Howett Works on Paper Gallery until March 6, 2022.

In conjunction with The Eye, the Mind, and the Heart: In Honor of Clark Poling, Curator of Works on Paper Andi McKenzie and members of the Art History faculty will present talks on works in the exhibition as part of the museum's occasional series, Works on Paper Wednesdays.

Wednesday, February 9 | 4 p.m.
Ackerman Hall
Walter Melion, Asa Griggs Candler Professor of Art History and director of the Fox Center for Humanistic Inquiry, explores Rembrandt's Virgin and Child in the Clouds in the exhibition The Eye, the Mind, and the Heart.  Rembrandt’s Virgin in the Clouds is a curious anomaly—a Marian image etched by a Calvinist printmaker.  The circumstances of its production suggest that Rembrandt used his Marian theme to display his powers of emulation, with specific reference to Italian masters such as Francesco Parmigianino and Federico Barocci.  He was also undoubtedly thinking of Northern masters whose Marian images he particularly admired—namely, Albrecht Dürer and Hendrick Goltzius, both of whom issued a Life of the Virgin series.


Wednesday, February 16 | 4 p.m.
Ackerman Hall
In 1971, a group of twelve artists created a portfolio of prints, the proceeds of which would go towards the payment of legal fees for the Chicago Seven, then on trial for antiwar actions at the 1968 Democratic National Convention. Curator of Works on Paper Andi McKenzie will explore Romare Bearden's Mother and Child from the series titled Conspiracy: Artist as Witness on view in the exhibition The Eye, the Mind, and the Heart.

This program will be held in Ackerman Hall. In accordance with Emory's Gathering Policy, masks are required. If you prefer to attend virtually through Zoom, click HERE.
Wednesday, February 23 | 4 p.m.
Ackerman Hall
Paul Klee, Alexander Rodchenko, André Masson—three artists working in different media, from different countries—share certain qualities in common. Looking at a range of works in the exhibition The Eye, the Mind, and the Heart, from Millet to Masson, Associate Professor of Art History Todd Cronan will trace characteristic themes and formal approaches that define the modern period. Most striking is the effort by a range of artists to project qualities of naturalness, even within a world that is seemingly defined by technology.

Wednesday, March 2 | 4 p.m.
Ackerman Hall
James McNeill Whistler is now known for his paintings—nocturnal images of the riverside and a particularly famous portrait of his mother—but during his lifetime his acclaim rested primarily on his prints. As an etcher, he was said to rank with Rembrandt. Although he drew his subject matter from the modern world, Whistler much preferred the old wooden bridges that spanned the Thames to the marvels of Victorian engineering that were replacing them. In this Works on Paper Wednesday program, Linda Merrill, Senior Lecturer in Art History, will examine an etching that memorializes one of those picturesque structures, The Little Putney, No. 1 (1879), and consider how Whistler’s view of London bridges was conditioned by the art of Japan.

This program is held in conjunction with the exhibition
The Eye, the Mind, and the Heart: In Honor of Clark Poling, on view from January 15 through March 6, 2022.

In addition, on Sunday, February 27 at 4 p.m., Virginia Gardner Troy, Professor of Art History at Berry College and former student of Clark Poling, will give a lecture titled "Discovering Anni Albers and Ancient American Art" in Ackerman Hall.

In conjunction with the exhibition The Eye, the Mind, and the Heart, the Carlos welcomes Emory alumna Virginia Gardner Troy  professor of Art History at Berry College, for a lecture titled “Discovering Anni Albers and Ancient American Textiles."

Troy’s decades of scholarship on the woven work of Anni Albers and her interest in the textiles of ancient Peru began as a graduate student in Emory’s Art History Department, working with mentors Clark Poling and former Carlos Curator of Art of the Americas, Rebecca Stone.

Troy’s published works include Anni Albers and Ancient American Art: From Bauhaus to Black Mountain, The Modernist Textile: Europe and America 1890-1940, and the forthcoming Dynamic Design: Jay Hambidge, Mary Crovatt Hambidge, and the Founding of the Hambidge Center for Creative Arts and Sciences, which will be published this year by the University of Georgia Press.

This exhibition has been made possible by the Massey Charitable Trust.